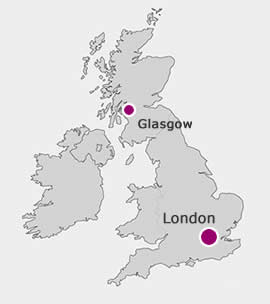 The English school in Glasgow

The Glasgow School of English is proud to be the first independent language school in Scotland, and is accredited by the British Council, in addition to the ISO9001 rules. It is also a member of English UK and Visit Scotland.

The school is located in central Glasgow, and offers international students quality tutoring and a personalised service in an international environment which is available throughout the year.

The majority of the students at the school are from Spain, Araba, Libya, Italy, China, Turkey, Korea, Jordan, Japan, Poland, Iran, Brazil, Taiwan, France and Thailand.

Glasgow has experienced more changes in the past two decades than any other British city. It has gone from being an industrial center in decline to one of the most fashionable places and one of the most vibrant cities in Europe.
The Scottish cinema, theatre, literature, music, art design and architecture are overcoming borders and capturing worldwide attention.

Glasgow means "dear green place" and the name is appropriate; The city has more than seventy parks and more green space per capita than any other European city. Its large student population (there are four universities in the area and many schools) has changed the city into a youthful city with a progressive character.

Things to Do in Glasgow

Moving around the city

METRO: Glasgow has a metro (Subway) connecting 15 stations known as the "Clockwork Orange". It is a six-mile loop around the city center and the West End every four to eight minutes, Monday to Saturday from 6:30 to 23:20 and Sundays from 11:00 to 17:50
Metro tickets can be purchased from the machines or at the ticket office at the station. Prices: 1 trip: £ 1.10; 1 Discovery ticket (1 day unlimited travel): £ 2.50

The nearest metro to the school is "Buchanan Street".

BUSES: Buses usually circulate from 06.00 to 23.00 Monday to Friday. At the weekends they start later.
However, some specific routes also run overnight. Bus tickets can be purchased on the bus. (With the exact amount).

Buses only stop at the stop, and you must put your hand out to make it stop.
You need to have the exact money or coins to buy the ticket
Keep the ticket until you get off, you may be asked to show it again.
To get off the bus, you must ring the bell to request a stop.

TAXIS: Taxis are usually black in colour and can be hailed on the street. All are licensed and have meters. Tipping is welcome but not mandatory. The main company is Glasgow TOA Ltd Wide Web site: http://www.gwtoa.co.uk/

Unlike England and Wales, legislation governing the sale of alcohol in Scotland is more permissive. The bars can stay open all day, until 24.00 while the clubs are usually open until 03:00, although the last admission is normally at 01.00.

There are over 700 pubs and bars in the city (proof that the Scots like to have a drink from time to time) as well as numerous nightclubs for everyone, from student areas in the West End to elegant premises in Merchant City.

This English course mainly focuses on the necessities of the students. It is perfect for those that want to improve their language from a general point of view. Every week there will be 15 hours of classes.

The English course is directed at practicing the most important parts of the language so that students see quicker results than in a normal course. 22.5 hours per week will be focused on the most profound aspects of the general course.

This course focuses on all of the most important aspects of language for the IELTS exam. Every week there will be 5 classes in the morning from Monday to Sunday, which makes 15 hours in total. The classes focus on the 4 main aspects that you will need to pass the exam. You will receive homework and you need to study outside of class.

This English course is designed to help students improve their results for the IELTS exam, as well as their understanding and production of spoken English. During this course, you will have 22.5 hours a week : 15 hours in the mornings where you will practice necessary exercises for the exam, especially grammar and vocabulary. There will be 7.5 hours of afternoon classes of General English, above all concentrating on spoken English, writing, reading and listening.

The school organises excursions to other cities, and visits to the main points of interest in the city.

Many activities are free, some you will need to pay between 5 and 10 pounds for transport or tickets. Full day excursions are organised to the Whiskey distilleries or Stirling Castle. The price of these excursions is 20-25 pounds.

It is ideal for students who really want to live and integrate into a different culture. Sharing meals with your hosts every day, you will have the opportunity to enjoy relaxed family situations in which you can practice and improve your language. Remember that families do not usually live in the center but in residential neighborhoods, so you should take public transport to get to school.

This residence is located in the center of Glasgow. The residence consists of small apartments shared between 5 students. Each apartment has a lounge.

The companies that fly to Glasgow from Spain are:

From the airport there are a variety of different ways to get to the city center.